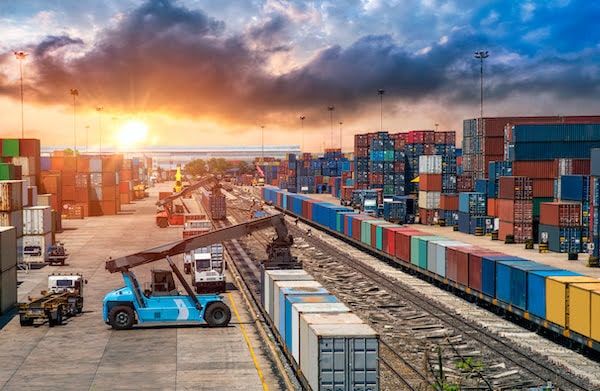 There has been a lot of talk about trains in the news lately, with two potential rail strikes in the past six months narrowly averted. With rail being so critical to how goods reach consumers, let’s take a look at exactly what role rail plays in our system and how rail impacts warehousing – and the entire supply chain.

The Impact of a Rail Strike on U.S. Supply Chain

The United States has the largest rail network for the transportation of goods in the world, with over 140,000 route miles of track. The U.S. logistics industry puts those miles to work, moving 40% of all U.S. ton-miles across those tracks. In 2018 that accounted for 61 tons of goods per American.

It comes down to this: Americans need what they want and when they want it. The supply chain crisis that began in 2019 has shown us just how interconnected our system of transportation, warehousing and distribution really is. We witnessed what happened with the shipping delays and bottlenecks at our seaports – particularly in the Port of Los Angeles.

But what we assumed would be the worst-case scenario is not close to what would happen with a national rail strike. The impacts are wide and deep. A rail strike would create a wide-ranging series of impacts – some immediate and some long-term. Here are some of the most drastic impacts it would have on the warehousing and distribution system here in the U.S.:

Food spoilage. Rail is responsible for more than a quarter million loaves of bread every single week. Over a third of grain movements in the U.S. move by rail. And fruits and vegetables like tomatoes, apples and other perishable items are loaded everyday onto rail cars to get past traffic jams, bottlenecks and driver breaks on their way expeditiously to their destinations.

The longer delays and increased traffic in our last mile infrastructure will cause more time and temperature sensitive goods to spoil. This, in turn, will cause increased costs in the system and demand that more goods come into the system to replace the spoilage.

Delays at docks. Without the efficient use of rail to/from ports and then to/from warehouses with direct rail access, the truck docks will back up leaving trucks lining up to be loaded and unloaded. Increased emissions, increased labor costs, and the costs of delays all come together at our nation’s warehouses.

Longer delays in distribution. There is a tight labor market currently in the trucking industry. There simply are not enough drivers trained and ready to go. This means delays in distribution of goods to warehouses and final destinations. Rail is also naturally faster over longer distances. So, when cargo is put on trucks as opposed to rail, there is a built-in increase in transportation time from the East coast to the West coast or vice versa.

Increased costs. Where new drivers can be found – or when some can be encouraged to come back from retirement – they will not be cheap. This second wave of driver shortages would lead to wage hikes – increasing the impact the logistics system has on inflation.

Increased congestion and wear on America’s highways. Replacing the capacity for rail freight would take an additional 460,000 long-haul trucks – every single day. This would cripple the American highway and distribution network and cause massive impacts on our economy. The added burden on the asphalt and concrete that make up our trucking network would cause them to deteriorate rapidly – causing even more accidents and increased costs of repair.

Increased accidents and fatalities. 95% of the 100,000 injuries and 88% of the 4,500 traffic fatalities connected to freight transportation are caused by trucks. This increase in truck traffic will likely increase those numbers as well.

For the second time in six months, a rail strike was narrowly averted. For now, we can sleep at night knowing that the trains are running and goods are moving. It is essential to keep in mind how dependent we are on every piece of our warehousing and delivery network.

Sometimes just because people don’t notice something on a daily basis, it can be assumed it is not important when really they do not notice it because it is simply doing its job – its critical job – and keeping America moving. We hope the rails keep running without interruption for a long time to come.

Learn more about our capabilities.

Are you ready to tell us more about your needs?

We appreciate your interest in our services and we are pleased to provide you with a competitive quote for your Warehousing and Logistics needs.
Request a Quote